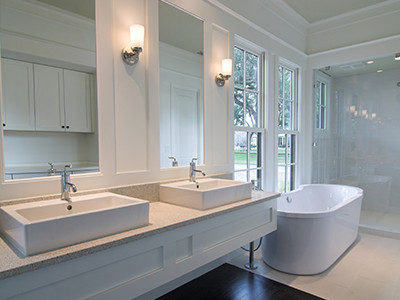 What Makes a Bathroom Fun?

Many people would love to have a bathroom as a personal spa retreat. If you can’t think of many people (or anyone) that actually spends copious amounts of time in their bathroom for pleasure, it could be that their bathrooms don’t have the design or the features that inspire long trips to the bathroom.

A trend that has actually been around for a decade is big mirrors for bedrooms and bathrooms. Space-enhancing and helpful for getting ready, tall mirrors are reminiscent of the mirrors in the palace at Versailles, and plenty of fun to play spooky games in the fall.

Part bohemian chic, part contemporary, mismatched tiles usually alternate between three or four shades of the same color. Blue, of course, is the most popular color to mismatch in bathrooms across the nation, with green the first runner-up. Mismatched tile may also be found in kitchens and bedrooms, but bathrooms are still their most-common placement.

Popular on and off since the late 19th century, clawfoot tubs have made a comeback since vintage and historic homes have come back in style. Also called free-standing tubs, these have an architectural echo of fountains. The originals were lines with porcelain, and used to be incredibly expensive, but since the discovery of acrylic as an effective substitute, the price of clawfoot tubs has come down from several thousand to just around one thousand, making it a more accessible luxury.

Enjoying a nice, warm shower is something that doesn’t need frilly additions, but frilly additions can still help. If for no other reason, adding a rain shower to your bathroom will fetch a higher resale value when you put your house on the market. Rain showers, as much as the name would insinuate, are showerheads positioned in the ceiling, instead of the wall, that give you the sensation of being caught in the rain. While this can be inconvenient during the showers where you aren’t washing your hair, it is still a therapeutic asset to any bathroom with a shower.

The toilet we know today has been around since the end of the 19th century. Since then, it has evolved in style, but one problem has always existed: the amount of water that a toilet typically requires to work. The last two decades have seen an increase in the number of water-saving and eco-friendly toilets. The western world has become concerned with the amount of water that ends up being wasted for certain everyday things, and the toilet is a good and understandable source of frustration with water waste. Older toilets will use more than newer ones, and unless newer ones are made to be eco-friendly, they, too, will consume more than their fair share of water. Water-saving toilets are better for the environment in that they minimize water waste, and making a case for them is easily done.

While many new homes include granite countertops, they are still just catching on in some cities. Granite is tough, attractive, and easy to clean. The material itself can be costly when mining and processing to a beautiful shine is taken into account, but it is far from impossible to make feasible to people who are interested in making it part of their home upgrades.

Water jet bathtubs first came in vogue in the 1980s, and have risen in popularity since. Offering people who can’t afford or don’t want a hot tub similar benefits, waterjet tubs can transport you to a much happier place without consuming as much water as a hot tub, and without the cost of a hot tub. Cleaning and maintaining your water jet tub is also significantly easier, for those of us who are usually pressed for time.